In addition to the wonderful parklands and gardens surrounding the Abbey, there is also our history to find out about. Click one of the links below to see more information about the Gardens, Abbey and Park, or stay on this page to find out more about the history of Delapré Abbey.

Explore The Abbey with our virtual tour 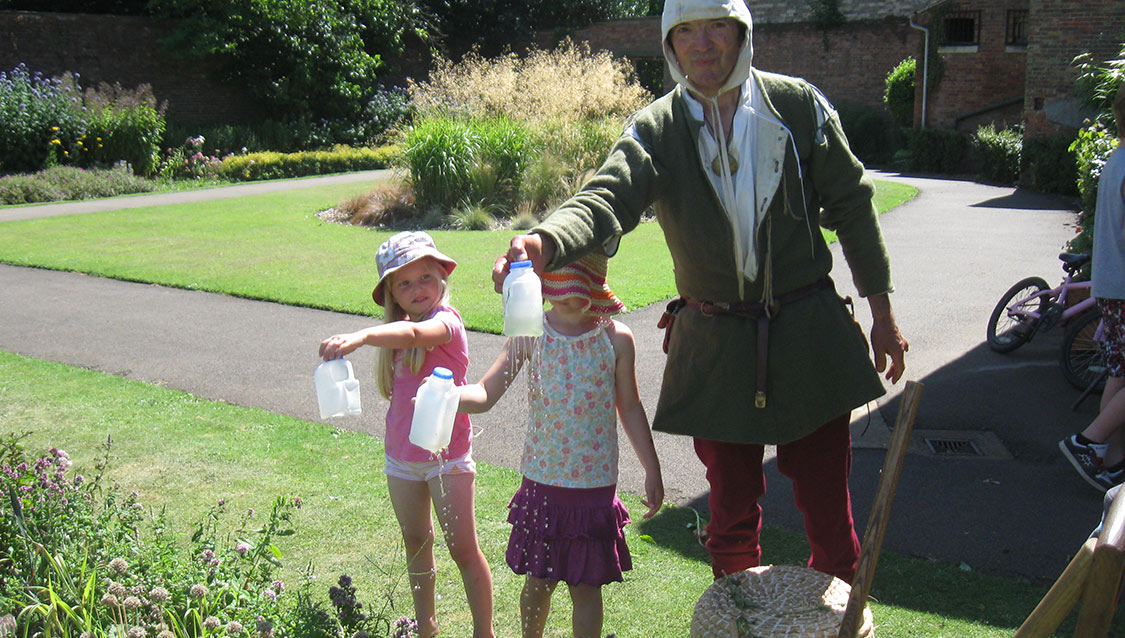 The Abbey is set within the remains of the formal and semi-formal gardens which were once the pride and joy of the Tate and Bouverie families. 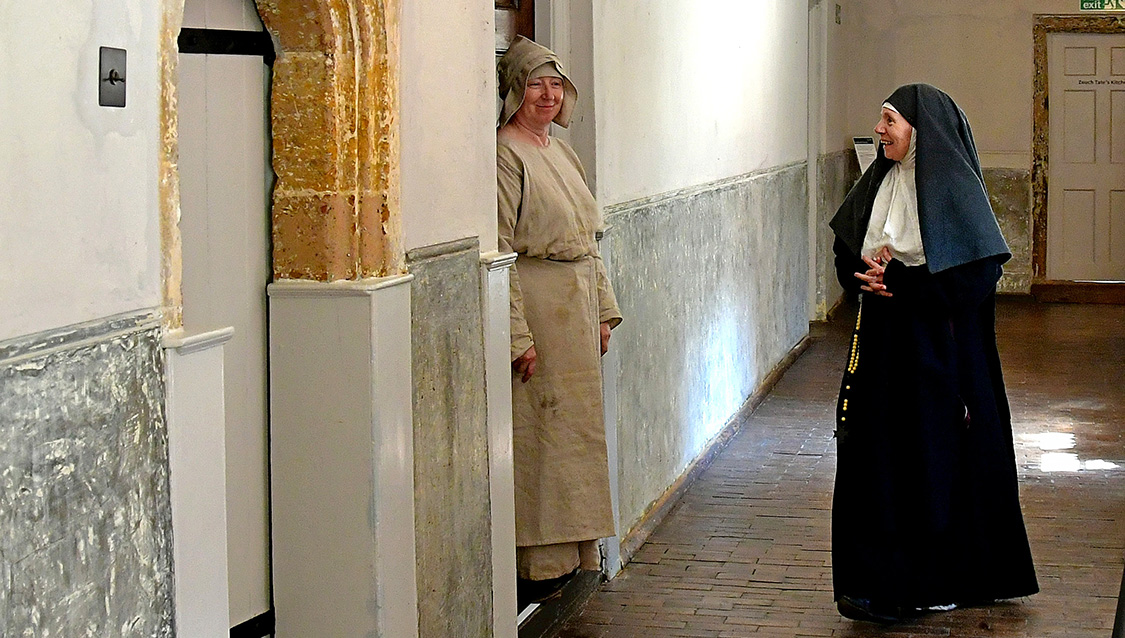 Northampton’s hidden treasure located just a mile or so from the town centre is alive with the possibilities of the present and surrounded by the echoes of the past. 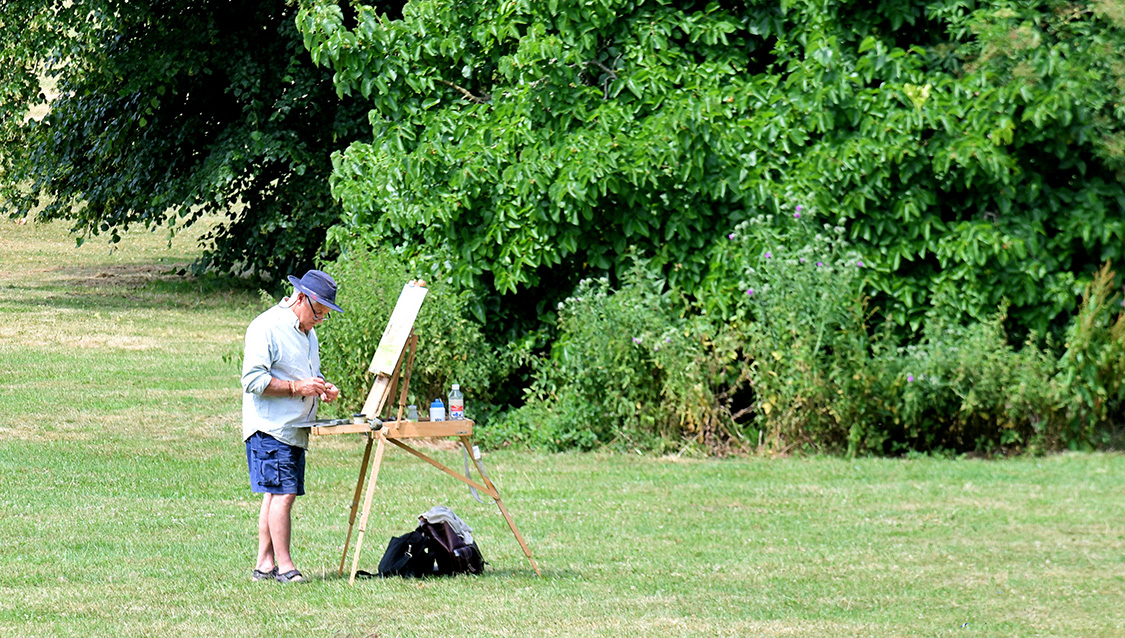 Beyond the Abbey buildings with its walled and semi-formal gardens lie over 500 glorious acres of parkland – a tranquil green oasis of woodland and open grass land.

Once there was a meadow, close to the River Nene and outside the medieval walls of Northampton. 900 years ago, a community of nuns came to these quiet meadows to create their nunnery – the Abbey of St. Mary de la Pré. Following the rules of the Cluniac order, these nuns formed one of only two Cluniac Nunneries in medieval England, and owed their allegiance to the great Abbey of Cluny in France.

Although they were not rich or many in number, the nunnery still had its part to play in medieval England.

In 1291, Eleanor of Castile, wife of King Edward I, died and her body was lain to rest in the Abbey’s church overnight – a welcome pause in the Queen’s last journey to London and burial in Westminster Abbey. Soon after, Edward I, full of grief, had a stone cross erected on the lands of Delapré Abbey in memory of his beloved Queen.

Nearly 200 years later, a more violent event would disturb the nunnery’s quiet life – the Battle of Northampton. In July 1460, the armies of York and Lancaster met across the fields near the Abbey in what was to be one of the turning points in the Wars of the Roses.

On December 16th 1538, nearly 400 years of quiet devotion at Delapré Abbey came to an end as Henry VIII laid waste to the churches and monasteries of Britain, evicting nuns and monks, taking their goods and possessions for himself and selling their lands to merchants and gentlemen.

With destruction of the Abbey of St Mary de la Pre and the exit of the nuns, the next chapter in Delapré’s story began – a new role as the home of the Tate family, who over the next 200 years, swept away the remains of the Abbey and created much of the building that is visible today.
Gentlemen and knights, the Tates were a prominent family in Northamptonshire – acting as county sheriffs and MPs for Northampton. As staunch protestants they were on Parliament’s side during the English Civil War and the then owner of Delapré, Zouch Tate was fundamental in providing evidence against King Charles in his trial for treason.

In 1749, the Tate family connection to Delapré Abbey finally came to an end when the only heir, Mary, died soon after her marriage to a naval man, Sir Admiral Charles Hardy.

Although Charles continued to have an interest in Delapré Abbey, building the 18th century Stable Block and creating the Walled Garden, he evidently decided not to live at the Abbey. So after some years of letting the house, in 1764 he finally sold Delapré Abbey to one Edward Bouverie, younger brother of Viscount Falkner , for the grand sum of £22,000.

Edward already owned many lands in Delapré and Hardingstone – so the country estate that became known as Delapré Abbey was born.

For nearly 200 years, successive generations of Bouveries lived, entertained, and played their role as Northamptonshire gentry – surviving wars, family scandal, and challenging economics – until in 1943 Mary Bouverie, the last of the direct Delapré Bouverie line, died leaving the house unloved and unwanted. 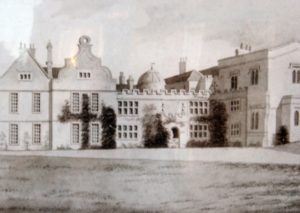 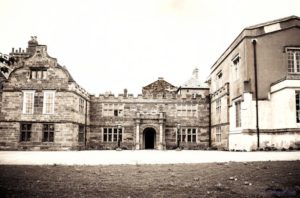 Unwanted by all but the local council who purchased the house and its many acres of land in 1946… the start of what was to be a turbulent 70 years for Delapré Abbey. The first threat, as the Abbey began its new life in public hands, came in 1954 thanks to post-war austerity with a vote to demolish the house and all its outbuildings. It was only saved by the campaigning of the formidable Joan Wake, who was determined that the house should become the home of the new Northamptonshire Record Office.

The success of Miss Wake, who opened the Northamptonshire Record Office at Delapré Abbey in 1959, kept the building safe for nearly 40 years. People could at last enjoy the gardens and parkland, hidden for so long behind private stone walls and high gates, so Delapré Abbey’s place at the heart of the local community was secured.

Sadly, as the end of the millennium approached, the Record Office moved out to new premises and Delapré Abbey was once again under threat. The building lacked a clear purpose and was in need of extensive and expensive repairs.

It was the determination of the local people that would help save the Abbey this time, with the Friends of Delapré Abbey campaigning to restore the building to create a venue that could be enjoyed by all. The Delapré Abbey Preservation Trust was formed, working together with Northampton Borough Council, plans were made and with the Heritage Lottery Fund’s help, a major restoration project began that would see the house transformed and brought back to life.

In 2018, after extensive restoration works, this much-loved building was finally opened for everyone to enjoy.

At the turn of the millennium, Delapré Abbey was a building without a purpose and a building “at risk”. It was in real need of extensive repairs to ensure the future survival of this Grade II* listed building.

Recognising the importance of Delapré Abbey as the town’s key heritage project, Northampton Borough Council worked closely with the Delapré Abbey Preservation Trust (DAPT) and the Friends of Delapré Abbey (FoDA) to help develop plans to safeguard the Abbey’s future. Hoping to bring substantial parts of it into public use as an events space and visitor asset, whilst ensuring the building was conserved, securing the historic fabric and structure of the Abbey was of the utmost importance.

The award of a £3.65 million Heritage Lottery Fund grant in 2013 meant that the first phase of these ambitious restoration and regeneration plans could begin.

This first phase of works has taken nearly 4 years to complete starting with detailed design work and planning during 2014 whilst extensive roofing works (funded separately by Historic England) were carried out.

A number of specialists undertook paint analysis, infrastructure work, and archaeological investigations at the Abbey and the results of these works helped provide the architects and planners with a better understanding of how the Abbey developed over the centuries. It also informed what and how the restoration and conservation work took place. 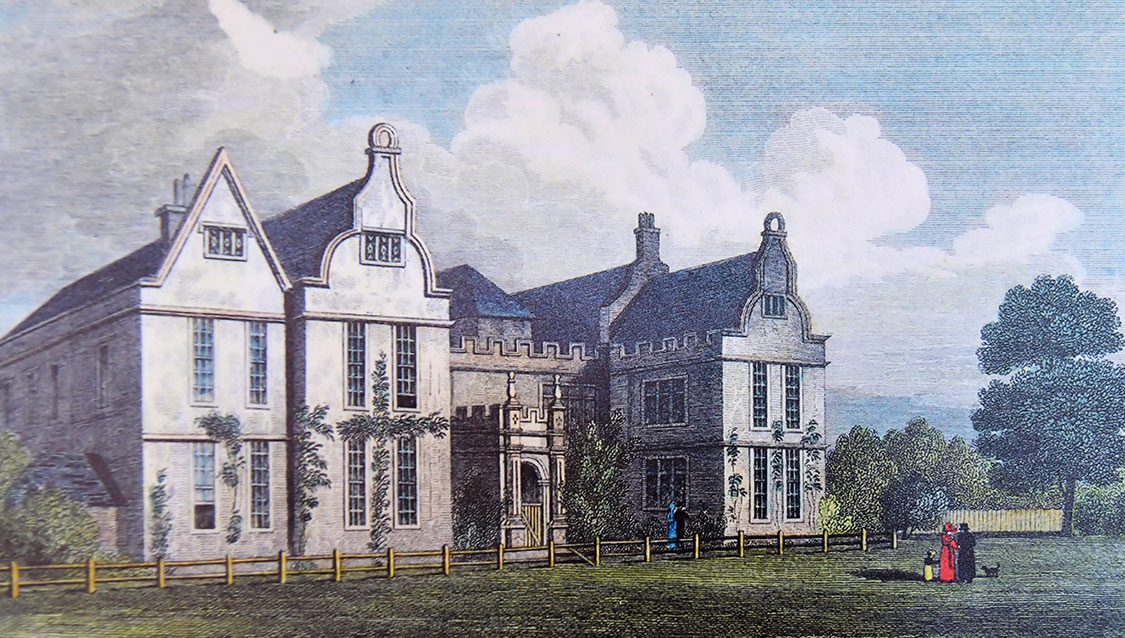 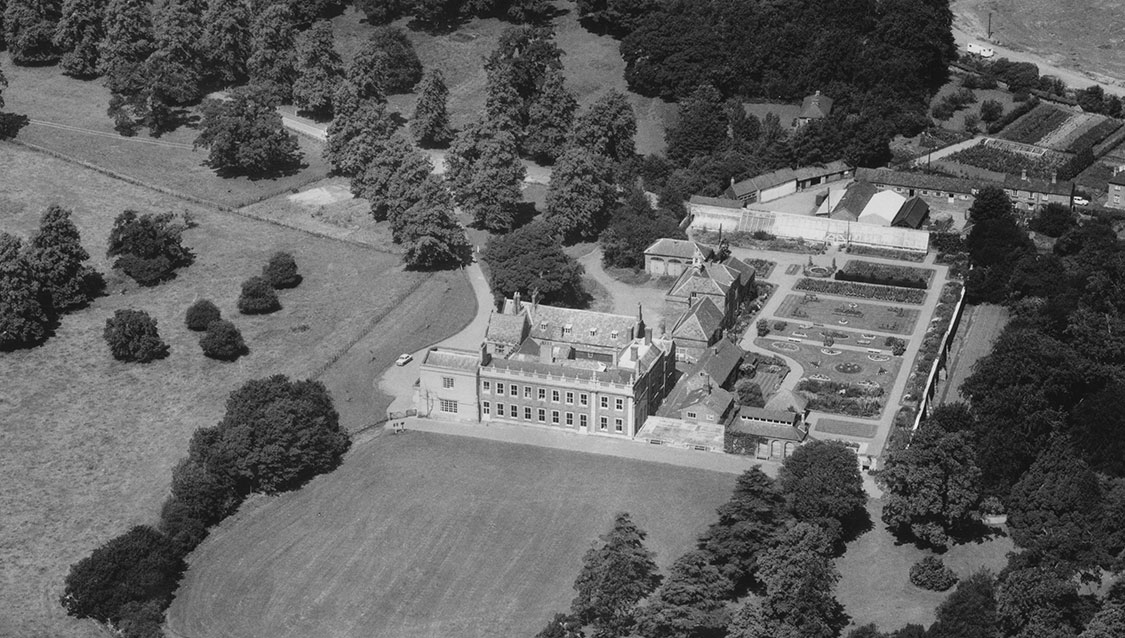 As with most projects of this type, we’ve experienced some unforeseen hurdles throughout.

These include discovery of a medieval cellar, which has now been preserved beneath the new kitchen, and a plunge pool – perhaps one of the most unusual elements of the building discovered so far.

In fact, following the discovery of several Roman artefacts in 2015, it is now known that the Abbey’s history stretches back up to a century longer than previously thought.

This massive restoration project was only the start of the work needed at Delapré Abbey – the plan is that the income generated by opening the house to the public and its use as a venue for weddings, events and conferences will generate funds to invest in the Abbey and enable future projects restoring more parts of the Abbey, including the 19th century stables. 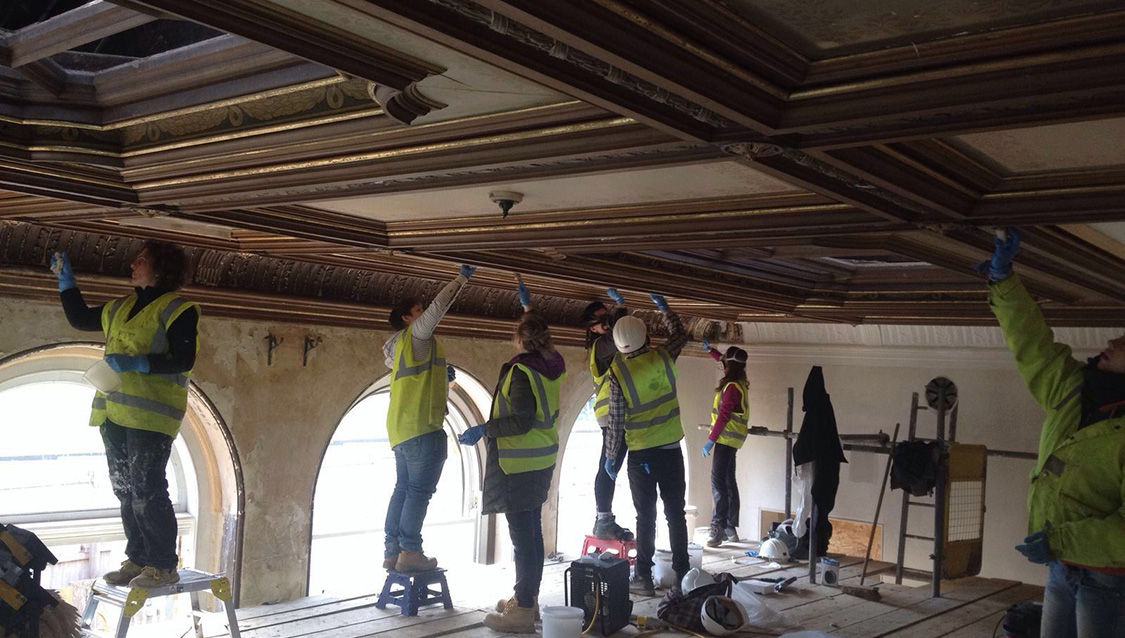 For more information contact our Events team on 01604 866712 or complete the form below.