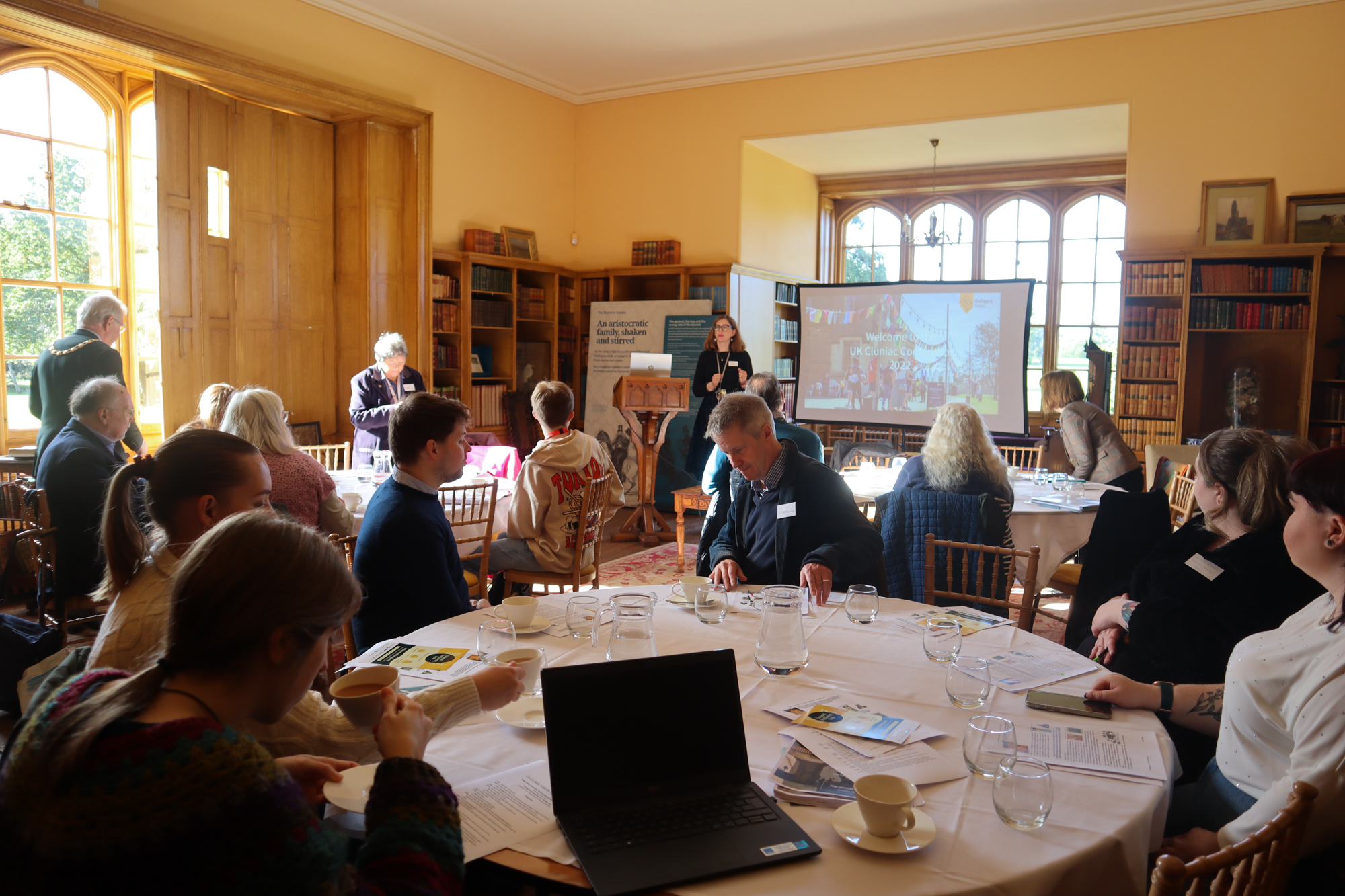 On Friday it was with pleasure that we hosted a group of people from across the UK at Delapré Abbey for the 8th UK Cluniac Conference. “What’s a Cluniac?” you may ask. Well, sorry to disappoint you but it’s not a conference about George Clooney. In this case, ‘Cluniac’ refers to the religious order of the group of women who lived here when the Abbey was first founded in 1145 until it was closed by Henry VIII in 1538. They followed a form of Christianity which took its leadership from the cathedral in Cluny, France. In the UK, there were 29 Cluniac abbeys housing men and only 2 Cluniac nunneries housing women – and Delapré was one of them!

At the conference last year in Thetford, when they asked who might like to host next, we put our hand up. We were excited to share the stories of our nuns with the teams caring for other Cluniac sites in the UK. Especially as since the start of the lockdown in 2020, five of our volunteers had been busy researching and learning about the women who lived here for 400 years and we now have a new permanent exhibition sharing the information they have discovered. 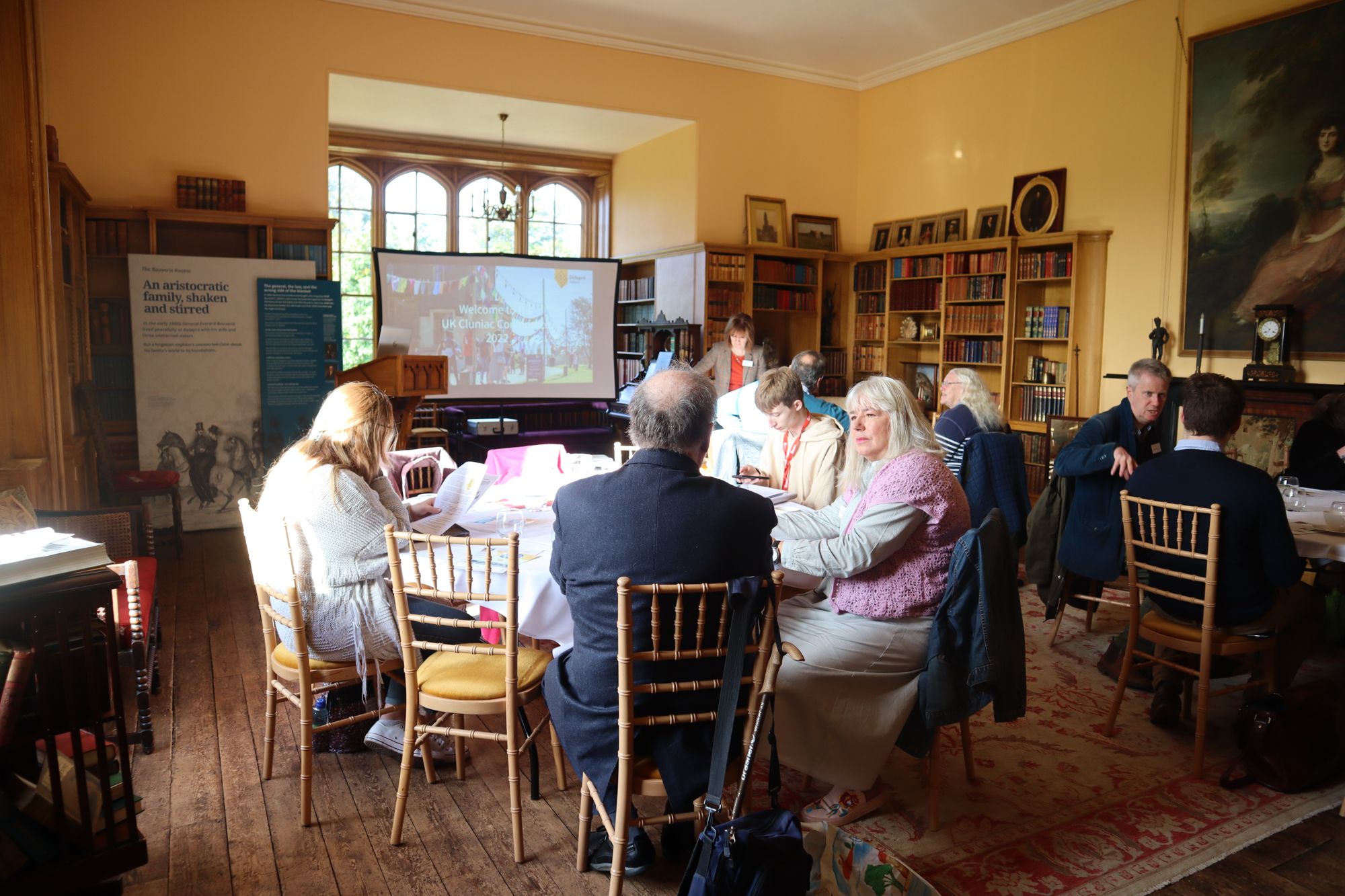 Working with this research team and our trustee Margaret Hawkins who has been a champion of the Abbey’s Cluniac heritage for a long time, we started to draft a programme for the day. We were keen that the conference should create opportunities for general discussion about Cluniac history, as well as sharing the stories of Delapré.

In the morning, following a welcome to Northampton from Cllr John Shephard, Deputy Leader of West Northamptonshire Council, our guests were treated to a tour by “Sister Brigitte” (a member of the research group and one of our volunteer tour guides) which focused on the site’s medieval history and then chanting in the cloisters by our volunteer live interpreters ‘Revelation’. 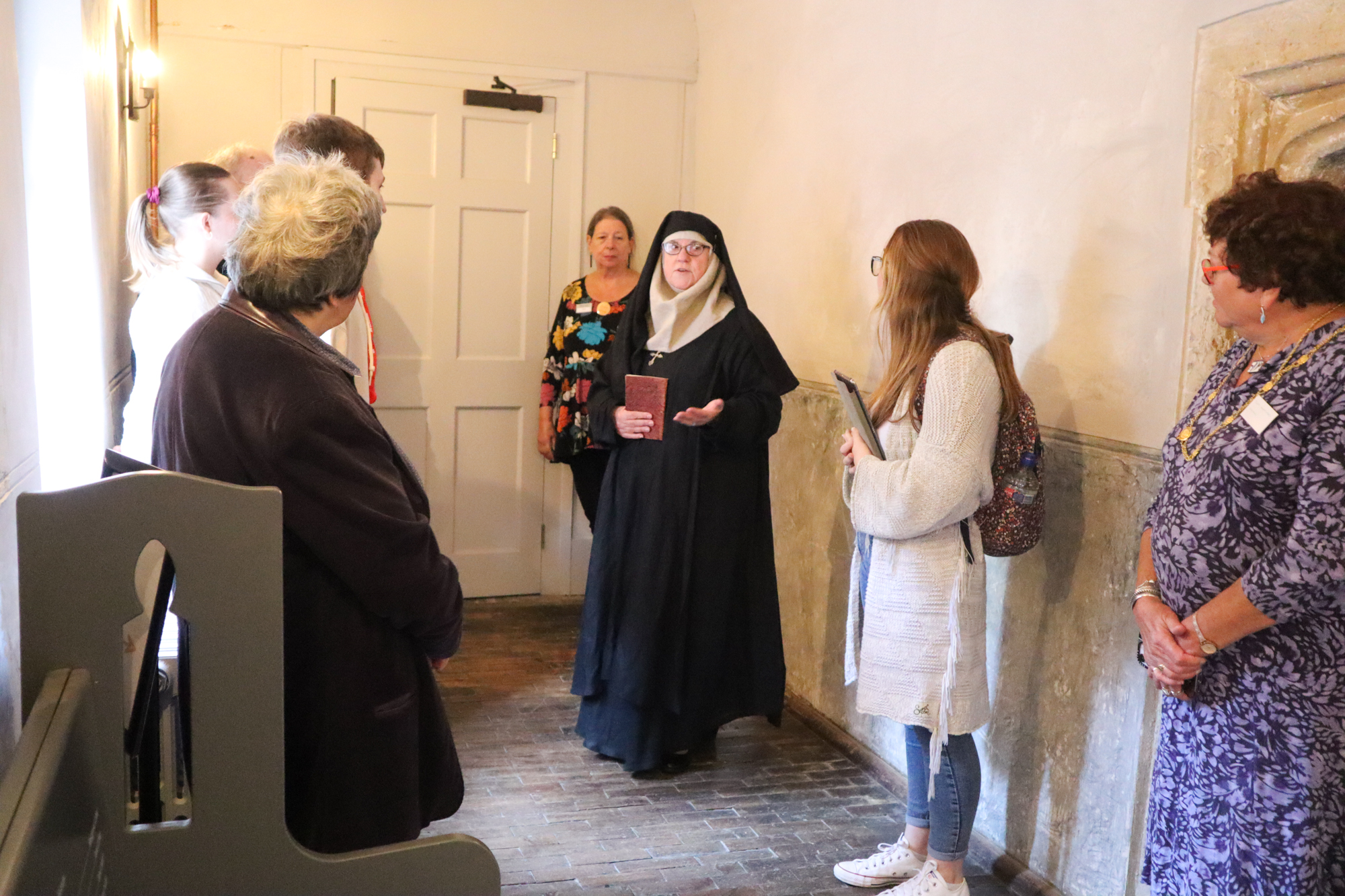 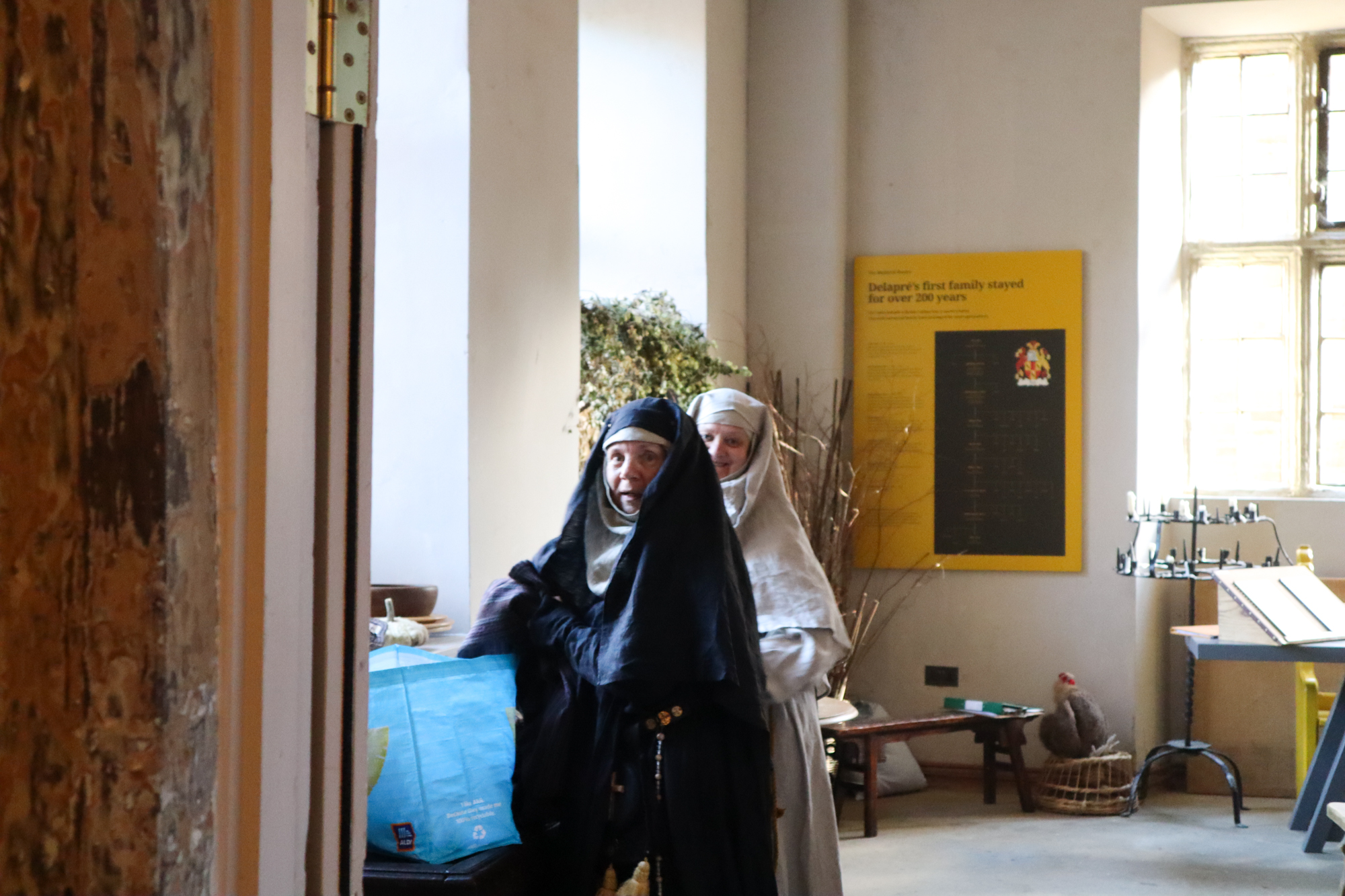 The group visited the Walled Garden with Antoinette (a member of the research group and a garden volunteer) to look at the herb garden she has been developing with a group of garden volunteers. 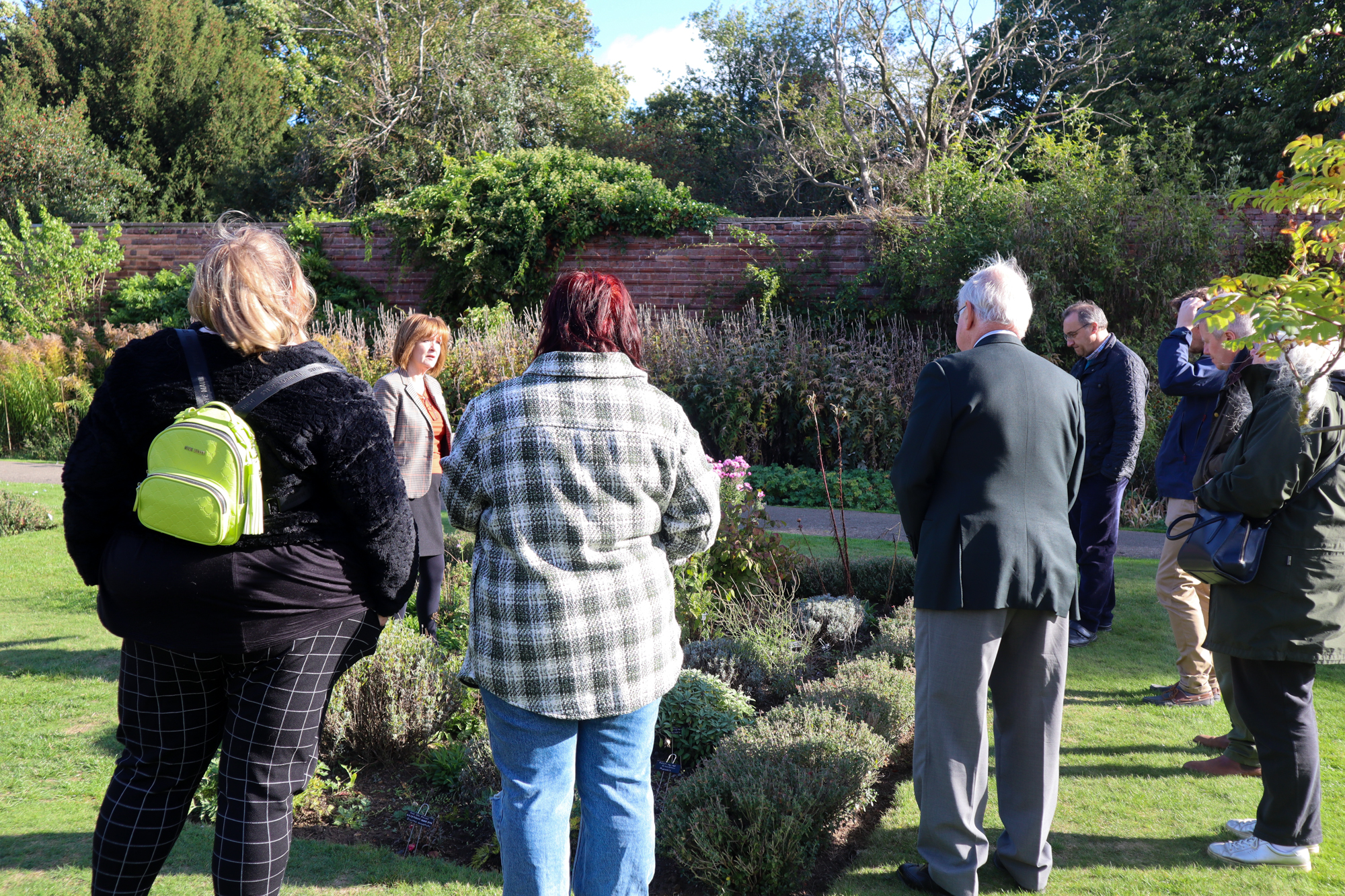 After lunch, the delegates heard from our research group on how their project developed, from local historian Ruth Thomas on the coming of the Cluniacs to Northampton, including information about St. Andrew’s Priory in Northampton and the founding of these Cluniac institutions by Simon de Senlis I and II. After a short interval, Prof. James Clark from the University of Exeter presented on the Dissolution of the Monasteries and the impact on Cluniac houses. He was followed by his PhD student Naomi Allen who spoke on English Cluniac texts, including one about Delapré. 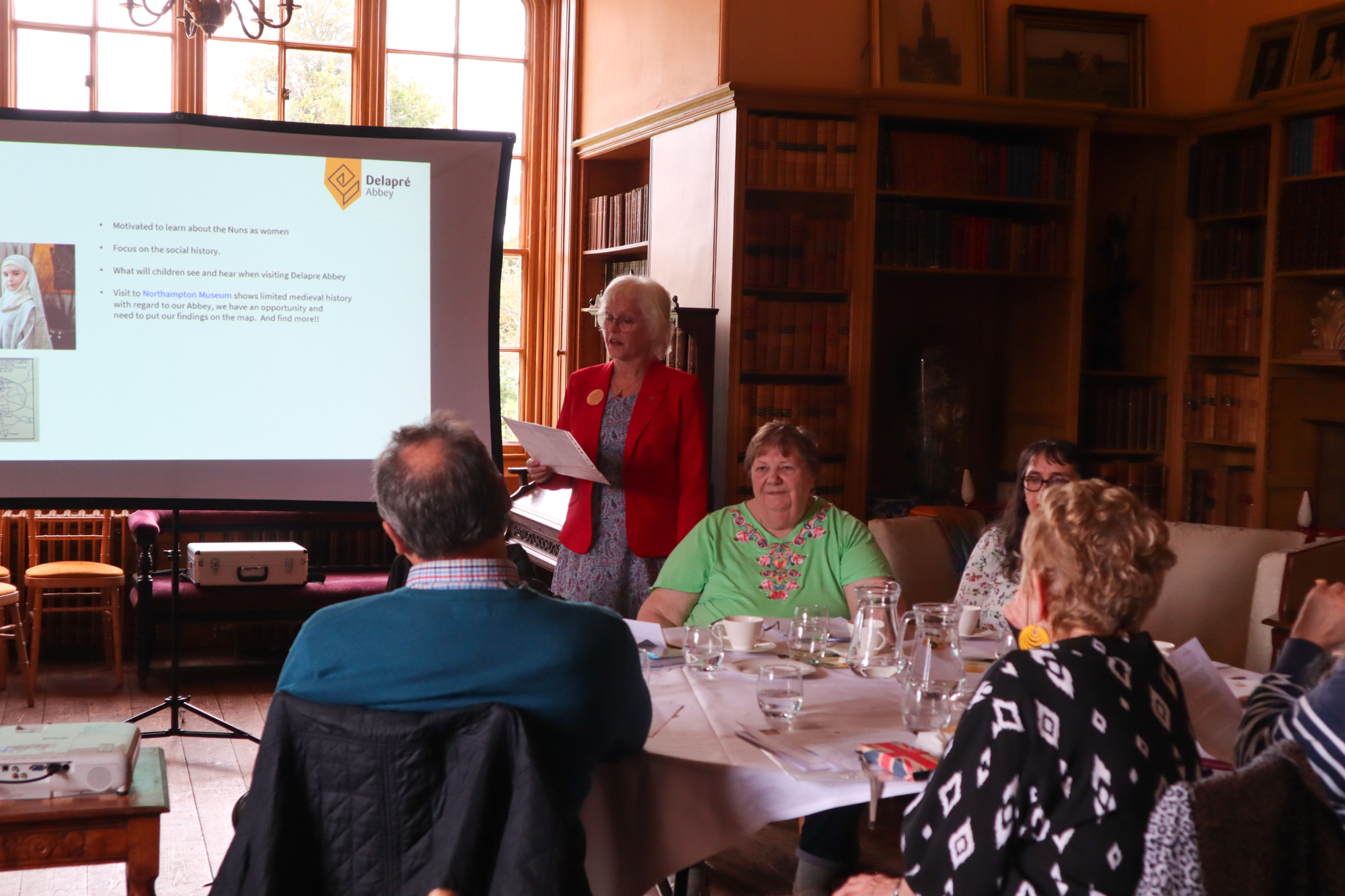 The day closed with a conversation between the representatives of Cluniac sites on organisational updates and an update on the bid by Sites Clunisiens Fédération Européenne (the Federation of European Cluniac Sites) for UNESCO World Heritage status for sites across Europe. 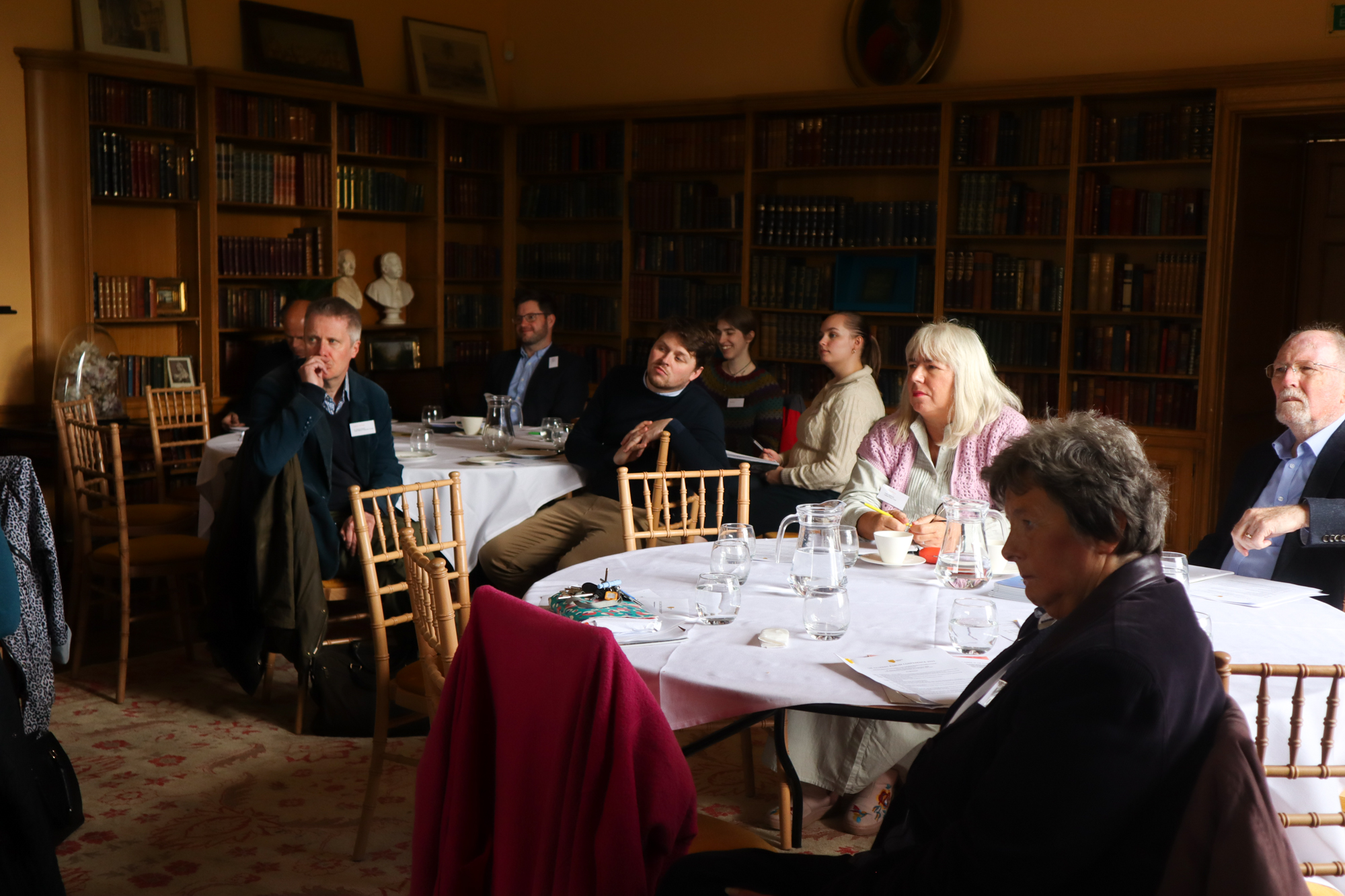 The Delapré Abbey Preservation Trust team felt it was a success and we’ve since had some lovely feedback. It was an honour to host people from English Heritage, Lewes, Reading and Thetford in addition to staff from Northampton Museum and Art Gallery and medieval history students from the University of Northampton. Our next task is to get the notes from the day sent round to all the sites who were unable to attend due to availability or illness and encourage them to support the European bid for World Heritage status showing the value of this medieval history, which we’re lucky enough to be part of.

Want to find out more? The Abbey is open on Wednesdays, Thursdays and Sundays between 11am and 4pm for visitors to explore. We offer self-guided admission or a guided tour.

You can also follow us on social media and join our newsletter for regular updates. Scroll to the bottom of this page for links. 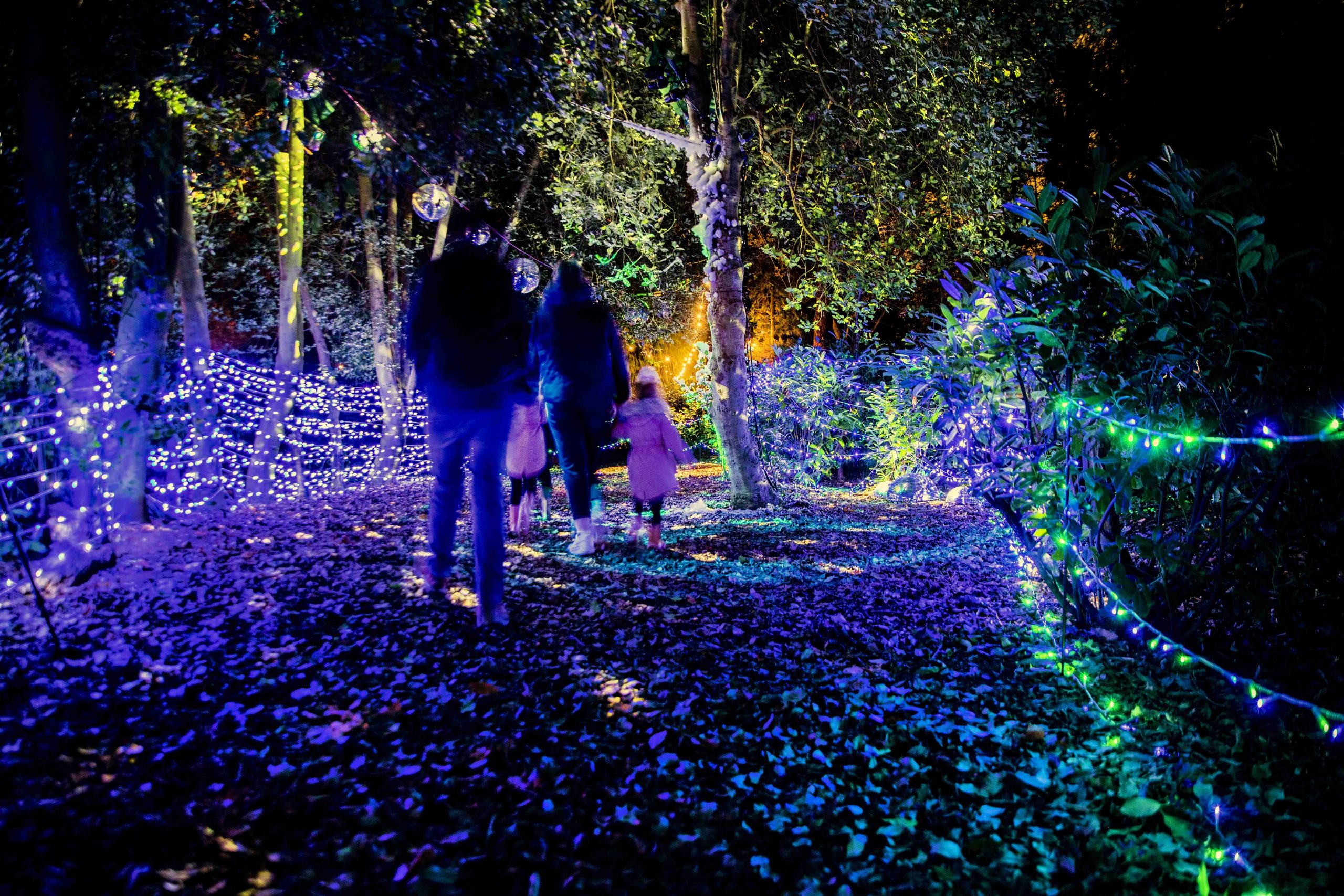 Fri 18th November 2022 – Mon 2nd January 2023
Tuesday – Sunday, 4pm – 8:40pm
To book tickets and for FAQs visit winterlighttrail.co.uk
Step into a breath-taking, illuminated woodland trail this Christmas!
With an all new, longer trail for 2022.
Discover an array of magical light installations with a brand-new trail experience that spans over 1¼ miles throughout the stunning woodland, walled garden and grounds of Delapré Abbey.
Plus, a great selection of local, independent food vendors, Après Ski bar and kid’s funfair attractions.

Book Tickets and Find Out More

Experience the Abbey by candlelight on this wonderfully festive, special out-of-hours tour. Hear about the Abbey’s history and its people on an informative tour whilst exploring the nooks and crannies of this spectacular building. 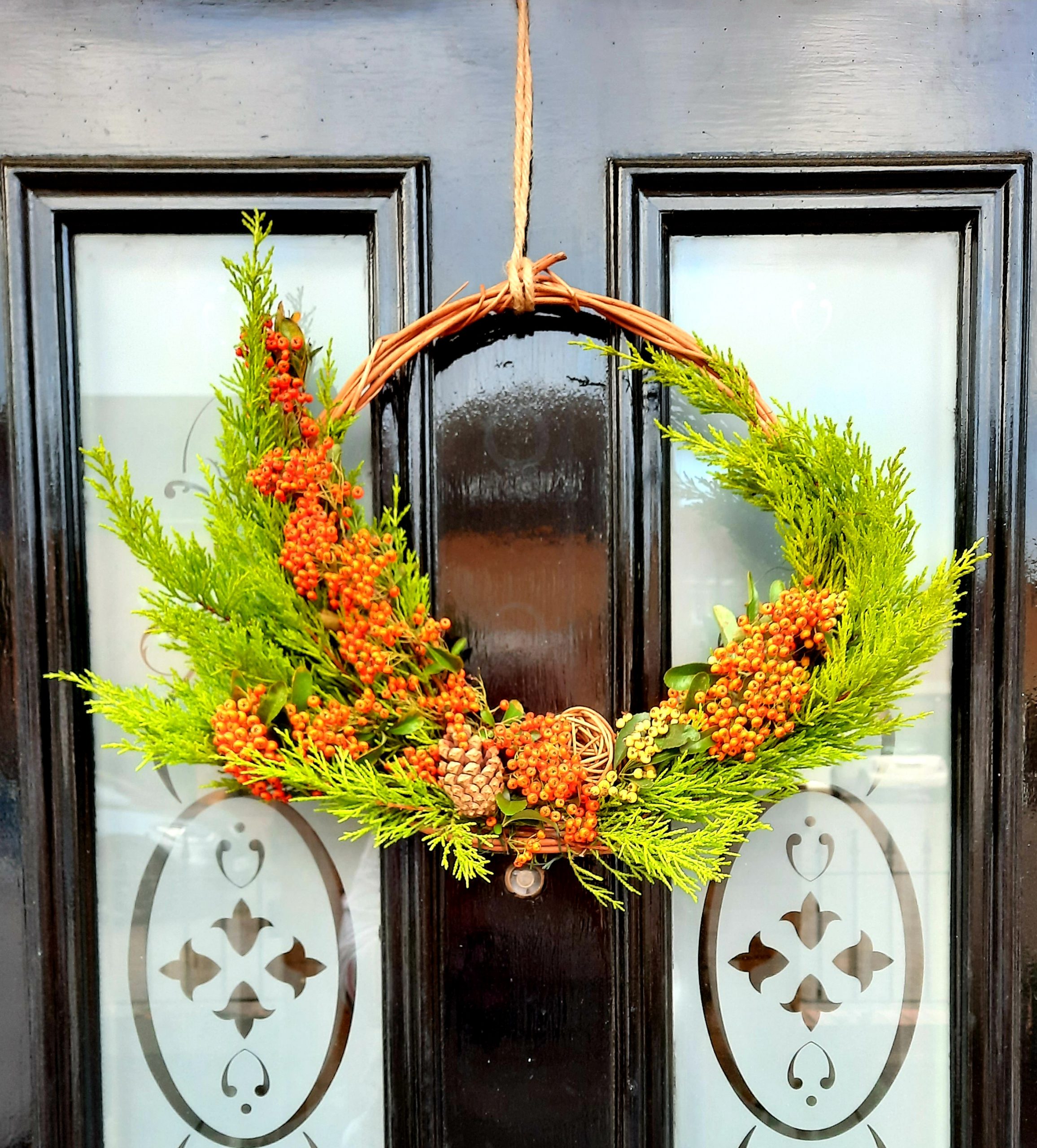 Make your own wreath using natural materials foraged from the grounds of Delapré Abbey.

During this workshop you will learn the art of making a wreath from scratch using Buff Willow as your base, and decorated with foliage including fern, holly and berries. Secateurs will be provided but we recommend that you bring your own gloves (and own secateurs if you wish!). 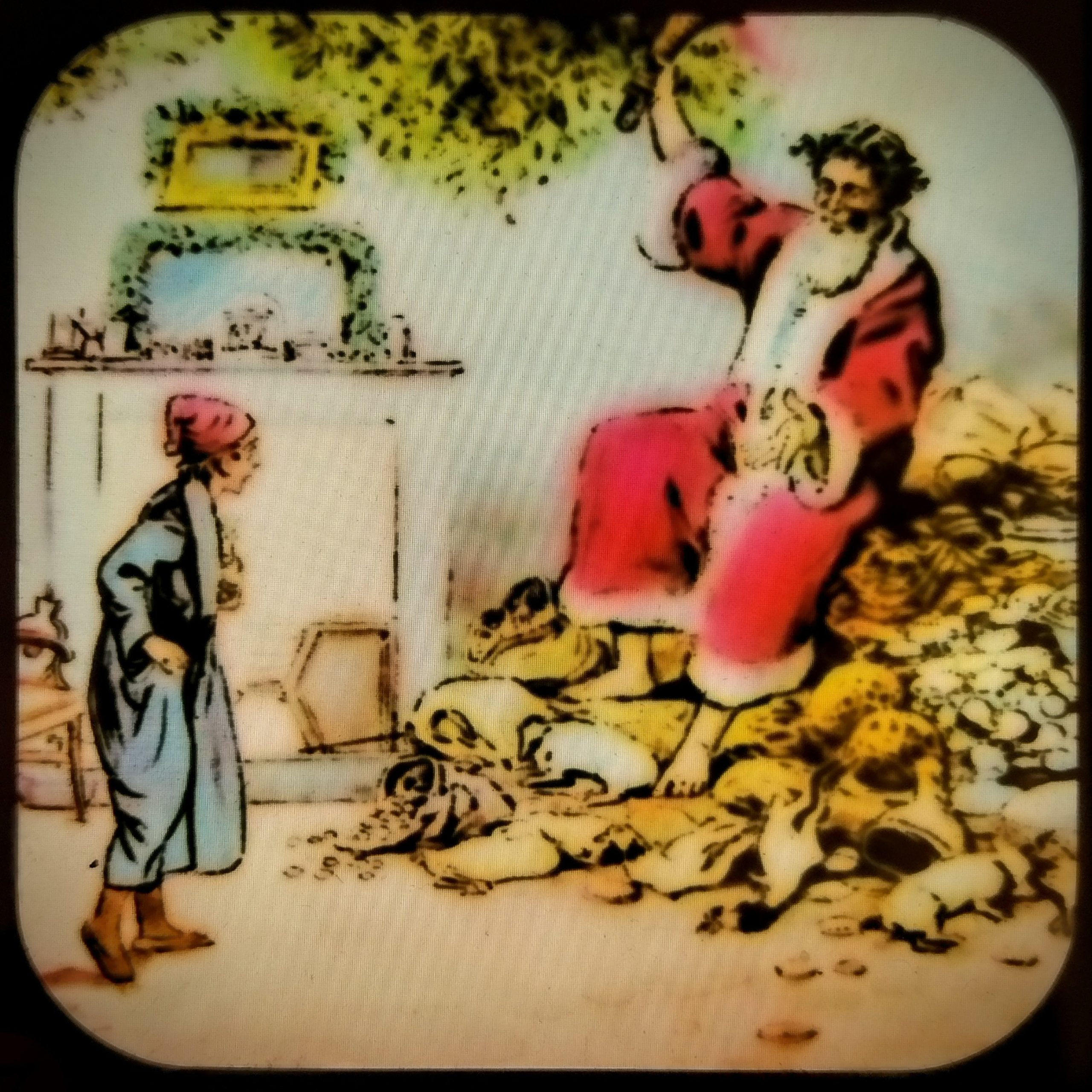 Fri 9th & Sat 10th December, 7:30pm Adults £15, Children £12 Spend a warm festive evening with Charles Dickens and his friends as they delight you with a reading of his celebrated

Spend a warm festive evening with Charles Dickens and his friends as they delight you with a reading of his celebrated classic “A Christmas Carol”, accompanied by the wonders of a Magic Lantern show to illustrate the timeless tale. Marvel as old miser Ebenezer Scrooge is visited by the spirits of Christmas and sees his past, present and future in a whole new light – the glowing light of Christmas. Laugh at the jolly jigs of old Fezziwig; clap along with Scrooge’s nephew and his happy chums; smile at the family fun as the Cratchits settle in for a merry meal and shed a tear for poor Tiny Tim; then gasp in dread as the mysterious Ghost of Christmas Yet to Come takes Scrooge for the most terrifying night of his life.

Featuring some of Northampton’s finest actors, and a genuine antique Magic Lantern, with a mixture of original Victorian and newly painted slides, this is a special show that’s not to be missed.

You’re sure to be brimming with seasonal cheer and feeling Christmassy as a glass of mulled wine and a minced pie when you leave. God bless us everyone! 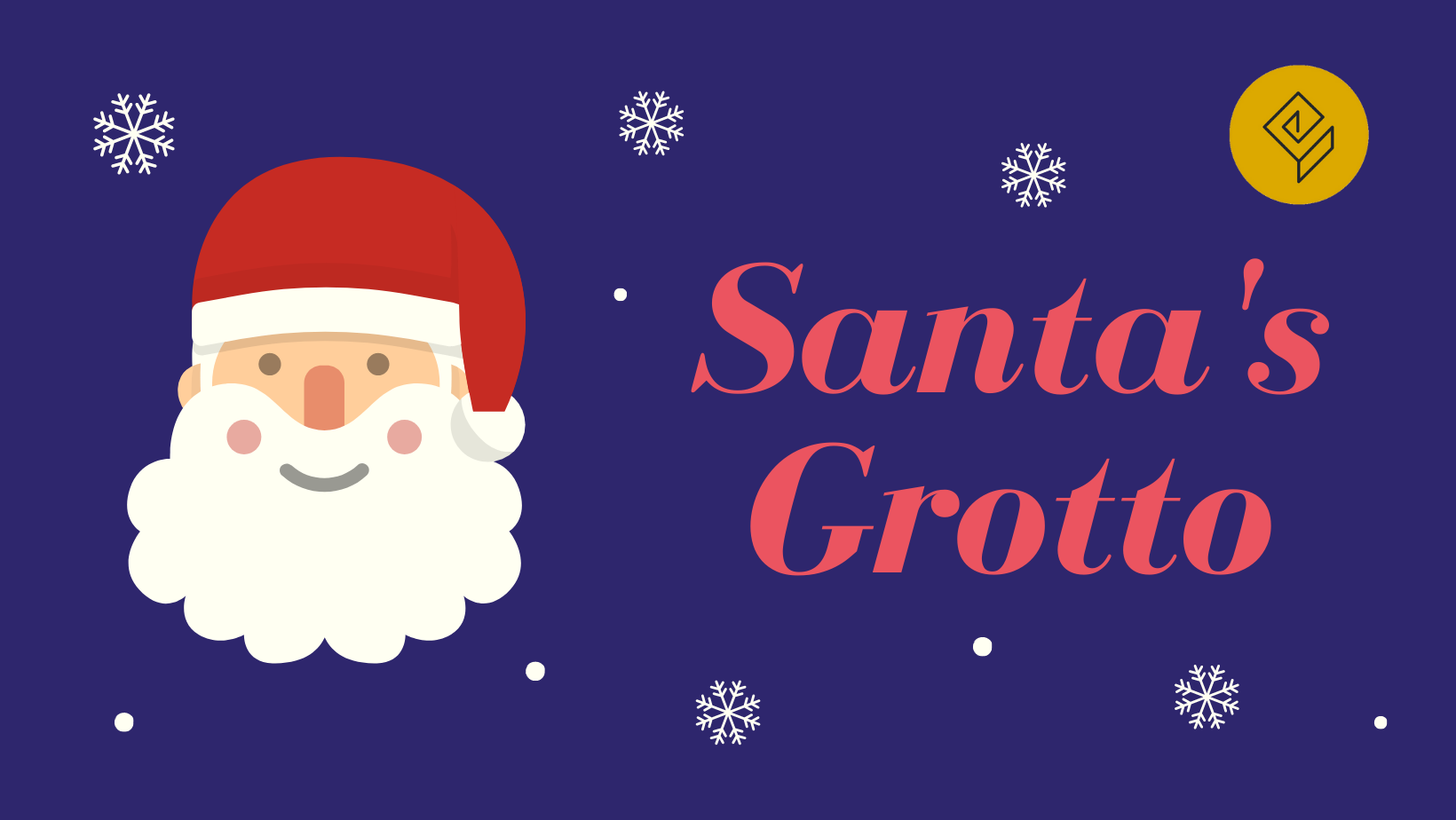 Meet Father Christmas at the Abbey, receive a present lovingly wrapped by his team of elves and hear an original Christmas story. See the house dressed for Christmas along the way. 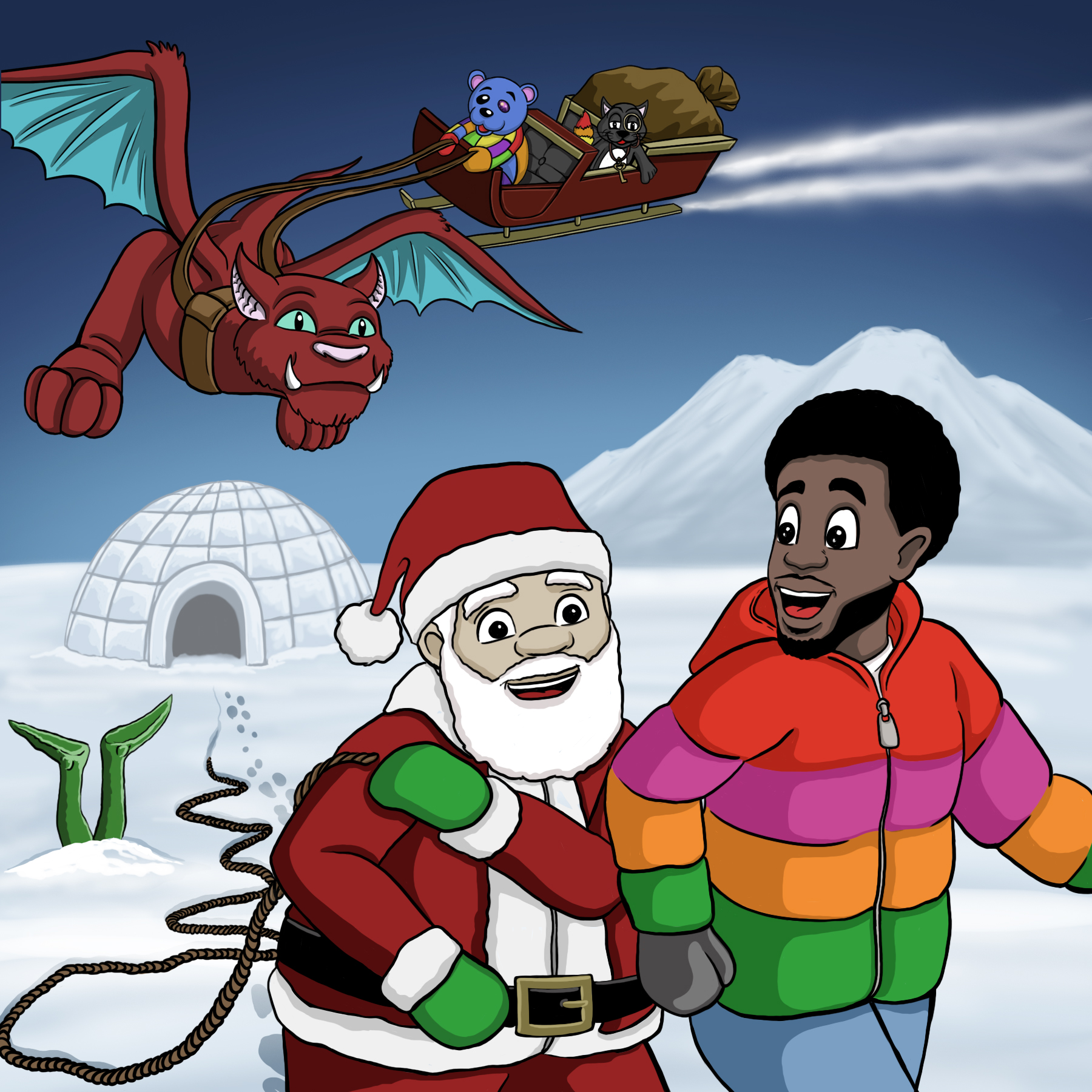 Thursday 15th December, 4:30pm-6:30pm £5 per person, under 13s must be accompanied by an adult Coach House Help!!! This is an emergency...Santa has been Grinch-napped, with only hours to spare until Christmas Day,

Help!!! This is an emergency…Santa has been Grinch-napped, with only hours to spare until Christmas Day, The Grinch plans to steal Christmas! Boys and girls, Santa needs your help… alongside Santa’s head Elf Preacher, you will work your way through various obstacles, in the hopes to rescue Santa… The quest to save Christmas begins!